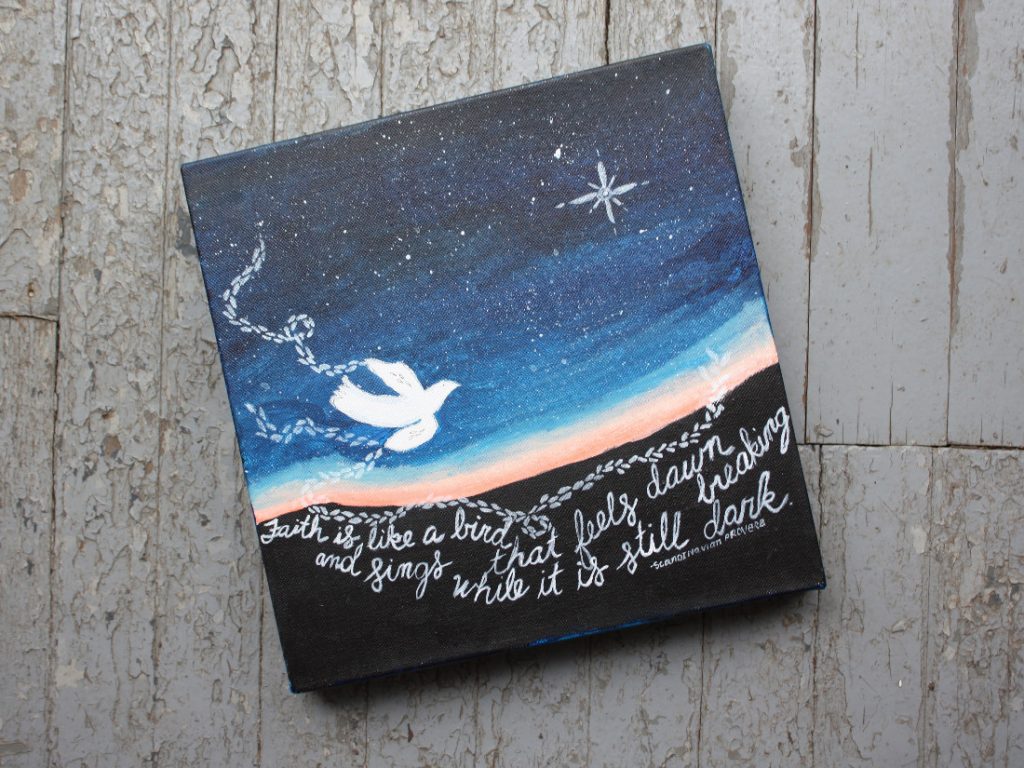 (The artwork is gone and sold, but the idea is pretty fresh in my mind right now.)

I made the mistake of putting Yo-Yo Ma playing Brahms in my headphones as I sat down to write, and I’m not sure that was a good idea, as it’s nearly putting me in tears.

I slipped in here October 15, and I said, basically, given all that was happening, I felt a very distinct pull to hunker down, draw in, nest, rest- create more margin. We really hadn’t taken many flights of craziness or anything from Sept 1 to Oct 15- it’s not like we were running frantic helter-skelter from one activity to another, but the load felt heavy all the same. I think I was verbalizing that day that I felt like I needed to shift how I was carrying the load, as what was left was necessary and good but heavy.

How could I have known?

We had a week of re-focusing that week. Really digging down, seeking margin. Deep breaths. Re-evaluating. Lots of books read aloud in candle light under cozy blankets. That whole week James was a bit off. He was tired. He was dozing as soon as he stopped moving and bless his heart, I was wondering what was going on. He’s always tired and he does drop off in sleep and has done so for years and years but he seemed especially exhausted. We went to church that Sunday, and from my position at the chant stand, I watched him get paler and paler as Liturgy went on. He just looked awful. So much so that we left church quickly so he could get some rest, barely staying for the fellowship we usually so greatly enjoy.

He steadily got sicker and sicker. He tried to work on Monday and ended up coming home early, in too much pain and too exhausted to work. He slept through Tuesday. By Wednesday, I couldn’t keep him awake, and as he hadn’t eaten since Sunday and was barely drinking, I was concerned by the signs of dehydration I could see. Around 10 am, we went in. He was immediately admitted for a kidney stone (technically, acute kidney failure) and dehydration. Less than two hours we spent in the emergency room- we were in his hospital room by lunch. Even on extensive IV fluids and pain management , he was not improving and his pain was incredible. They decided to surgically ‘blast’ the kidney stone the following morning- emergency surgery. He ended up having to have a stent placed during surgery as well. He did not respond well to anesthesia (he has severe sleep apnea) and ended up being on oxygen until midnight that night. His response was so bad that a neurology/pacu nurse was with us in the room until almost ten pm.

I’ve been around surgery protocol for so long (both for myself and my children) and in my head I knew exactly what was going on, that he would be fine, that everyone was doing their jobs, but I’m not going to lie. That afternoon and evening were terrifying to me. It was a sudden picture of what might/could happen if they couldn’t get it figured out.

I can handle that in my kids. I did not handle it well in my husband. I was having a hard time compartmentalizing (as I usually do with my children) my care giver role while watching the love of my life suffering and being flat out unable to do anything to ease it.

I wrote the above nearly two months ago, on Nov 29.

He pursued better primary care and has been doing a whole bunch to address his health since; things we had sort of shoved to the back burner with all the challenges we’ve faced with Elliana and Josiah. No longer.

My paradigm has shifted again.

That’s the thing about life that never fails to surprise me. You think you’ve got it all figured out, learned all the hacks. Swerve and duck and dance. Life laughs back at you and pulls a left hook you couldn’t imagine out of nowhere. Sometimes it’s a nice left hook and sometimes it’s a real mean one. You just never know when to look for the swing.

Life has been, well, (whispers it softly)…kind to us…the last two months.

James’ recovery went well, we had some time away for Christmas, our schedule has been light and just right for us. It let us all take a good, deep breath and it has been a lovely feeling.

I can’t shake the experience I had at James’ hospital bedside that day. Isn’t it weird how sometimes reality has been reality for much longer than we’re willing to admit it has been? I’ve sort of been running from a calling for a long time, so long, really, that I couldn’t even see it as a calling. And yet it gently edged its way back into my heart that day. Yes, it was a terrifying day. I won’t deny it, I don’t think we should, really, when medical trauma happens. It is scary. But it was also a reminder of all the gifts this long journey with two chronically ill children has given me. Yes, I said gifts. Maybe the better word is tools? Both a gift and a tool perhaps?

I think, for lack of a better word, I have been called to be a healer.

I won’t ever be a doctor or a nurse, but this idea of creating space for healing, of being the person that sort of channels that for another? That really resonates with me. It calls to mind the idea of doula, but not in birthing babies- birthing space and kindness and peace for someone who is ill or hurting. I’ve realized that this long, deep, dark journey with illness has given me eyes to see what others often can’t; ears to hear (and translate) what is confusing and complex for others; hands to soothe and work and love.

I used to abhor hard work- cleaning. Scrubbing. Laundry. Somehow in all of this journey of the last four years, that has profoundly shifted for me and I welcome the feeling of setting things aright with prayer and elbow grease. My dear friends Tonia and Elise taught me ora et labora (pray and work) for so many years, but the lessons didn’t sink deep until I walked through the shadows and storms. To be able to use my hands to bless and my heart and mind to pray is a gift; a gift that is not afforded to all. It is a gift to become these things for my children when they cannot- for my husband when he is ill- for others- to give them a soft space to land.

This all became super salient and fresh in my mind when my dear, dear friend fell ill just before Christmas. She was seriously, seriously ill. She has spent the last month in and out of the hospital. Glory, glory, glory to God, she was able to come home just yesterday. I think of it and literally want to do a little shuffle dance of joy to think of her home.

All of these gifts have been brought to bear in loving on and supporting her and her family while she was recovering…gifts I never would have had to give if it hadn’t been for all the dark waters we have been brought through. Things I never would have thought of, or seen, in someone else’s illness, had it not been for what our family has been through. Like a special pair of eyeglasses.

It’s truly given me new visions of what the future might look like for me and my family, and that’s kind of exciting. No matter what may come, I’ve got this little toolbox in my back pocket to pull out as needed. I have something to give to the world in its pain and its hurt instead of just standing agape and at a loss for what to do. Ora et labora. I can listen. I can make space for healing and stillness and serenity and hope and all of those things that the world so desperately needs more of. This is my calling: Sing while it is still dark.