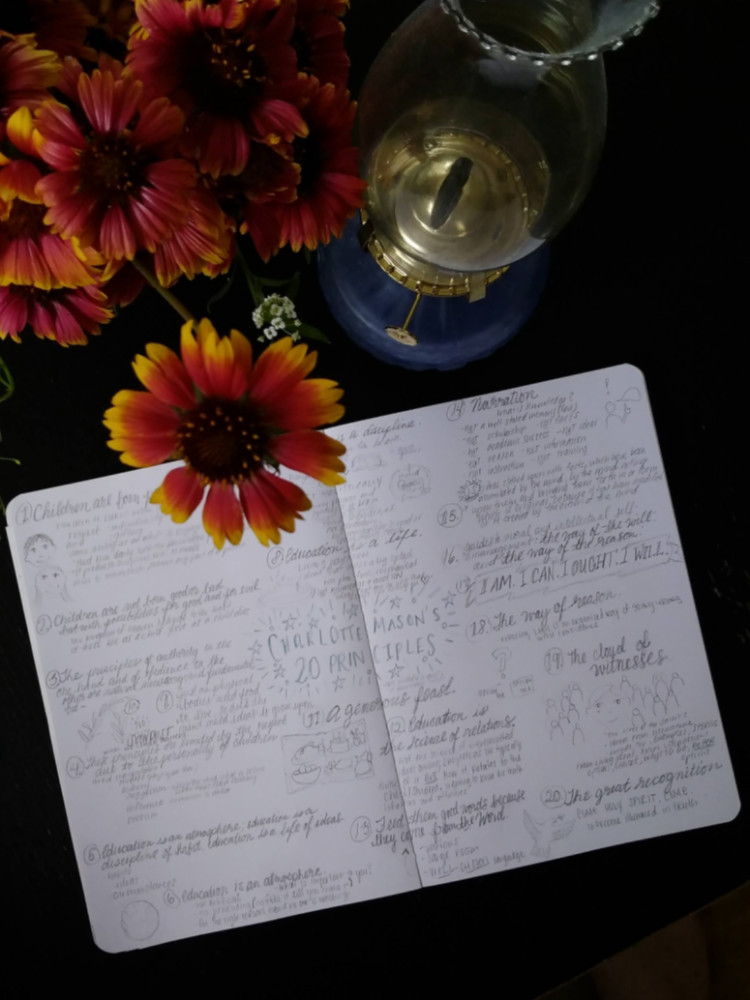 The lovely folks over at Charlotte Mason Poetry have been making available some of their video workshops for free this week. (Here’s the link, if you’re interested- they will come down Aug. 31) Above are my notes from Art Middlekauff’s workshop on Charlotte Mason’s twenty principles. I was pretty familiar with them before this workshop (and maybe you are too?) but even so, I learned so much from it! I’d definitely recommend it whether you are a CM newbie or a seasoned veteran. I was particularly struck this time by the connections between my own Orthodox faith/theology and Charlotte’s thoughts, especially in principles one, thirteen, nineteen, and twenty, and I want to dig into those connections in this space, as I have time. Noting it here for accountability, ha!

It’s no secret that math and I are not exactly on friendly terms. My own calculation speed and ability to follow large form equations has increased over the years with the constant teaching and reviewing of elementary math principles with my children these last eight years or so, simply from having to teach it. I don’t think I (or my teachers) realized how many fundamental pieces of foundational mathematical knowledge were missing in my vocabulary, but boy, they were…extensive. So much so that a few of the teachers I had suspected that I might have dyscalculia . (I had a very consistent habit of switching whole equations and number sequences.) Looking back, I don’t think I did or do have dyscalculia- my switching had more to do with how little I understood the processes of multiplication, division, and fractions. That might slip by in the elementary years but really becomes telling in the upper abstract maths. If you haven’t mastered (not learned) those processes, the yawning chasms between different rungs of the abstract maths ladder will become very deep indeed. Anyways, I breeze through my older children’s Algebra 1 and Algebra 2 work now, something I wasn’t capable of even five or six years ago. It amazes me.

Needless to say, I was so interested in what Richele had to say given my storied history with the language. I absorbed so much from her workshop that I am still unpacking it four or five days later. I will probably watch it again before it disappears, it’s that good, and so full of information! Two things that I have been thinking about constantly since: keeping the concrete>imaginary>pure number continuum in mind when teaching and evaluating, and also, the need to include more mental math processes in my teaching. (It’s my weakest point, still. I could answer only one of the five or six examples Richele gave.) This is where the holes were in my own mathematics education, and I want to make sure it’s something I pay attention to with my own children. There are so many resources and ideas she presented that I am still unpacking it all! I’m sure I’ll have more to say as I digest it.

I want to catch Charlotte Mason and the Educational Tradition workshop this week, but haven’t been able to swing it yet. Hopefully!

What has been really making you think and inspiring your own education lately?