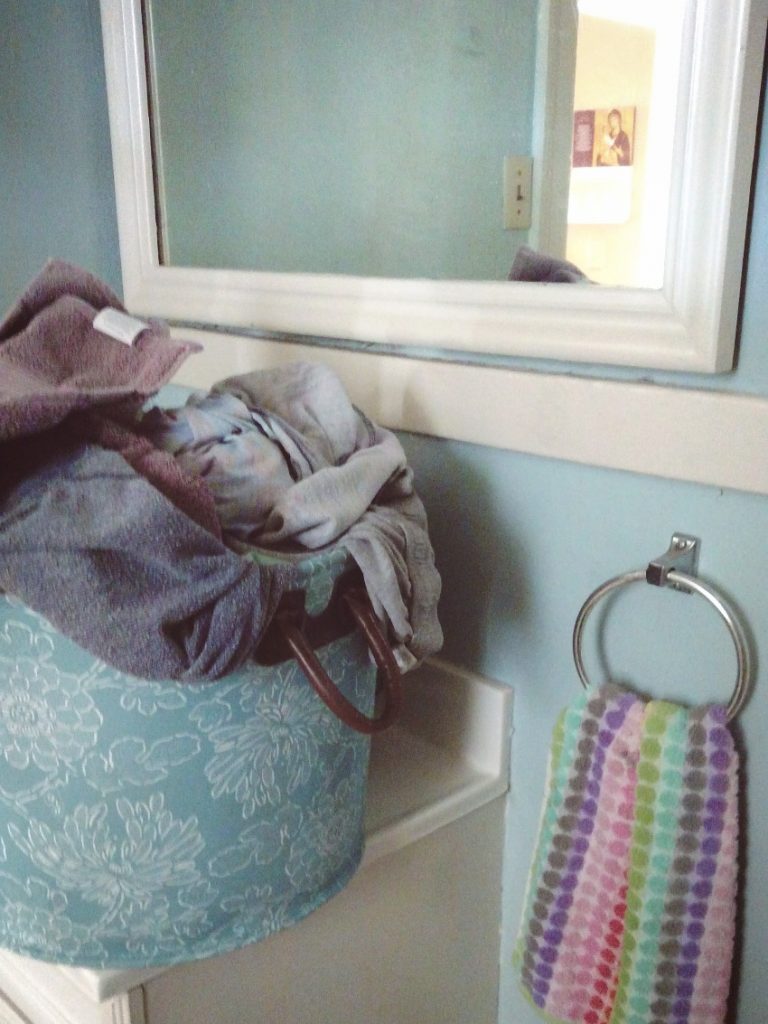 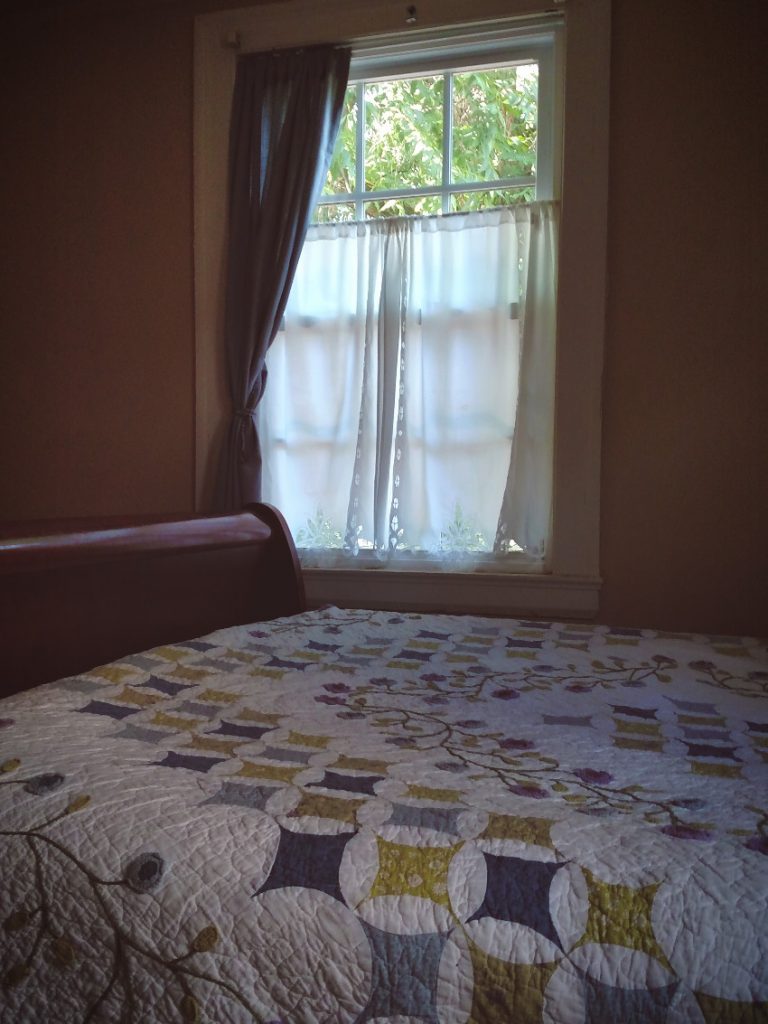 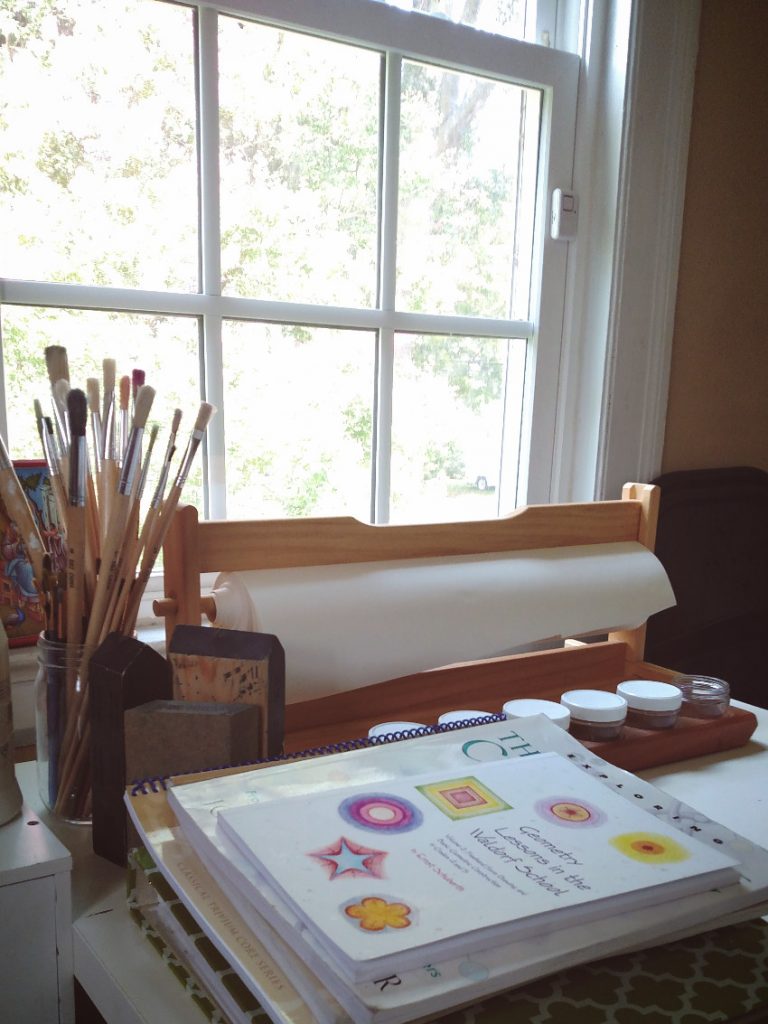 We’ve never done a home renovation, though we consider ourselves near experts on the subject after watching years of HGTV, especially Fixer Upper, but I can tell you that the reason they tell you to live with a space for a while before you change it is because you really have no clue how a space flows until you live with it for awhile. I was thinking of this, and chuckling, a few weeks back when we basically re-arranged the whole house, right down to our iconastasis. Even the saints like a bit of elbow room, am I right?

We’ve lived in this house for three years or so, living in roughly the same way as we did when we moved in. Our schooling was done at the kitchen table. Our Master was on the third floor. The kids all shared rooms. The flow sort of worked, but what could we do? We’re renting. You know, all of those things you think about a situation when you’re looking at it head on.

But if you tilt your head to the side…

It was my big boys fault, really.

They are getting tall. Really tall. And big. They take up a lot of space, teenage boys. And the room they were in, plus their racked bunkbeds…well, they were starting to resemble Alice after she drank the cordial. There was not enough space for them, their beds, their desks. I swore if you looked in the windows you were going to see elbows and knees poking about with no room to move. Bless their hearts.

I started to wonder what would happen, and if, the beds would fit in the alcoves of the master bedroom. A germ of an idea was forming. James measured, and, sure enough,all four of the boys’ beds would tuck in just right. This would leave a huge space in the middle for all of the boys and their stuff, with plenty of room to spread out with legos and train set ups and a nearly six foot tall teenager could sprawl whichever direction he so chose with plenty of room to spare. We affectionately call it the boys’ dorm now. It always looks like a tornado has rolled through these days, but it’s great! I don’t see it unless I want to, and they like the autonomy.

That meant James and I moved into the big boys’ old room, which was a perfect cozy size for us with space for a bookshelf and a small seating area. The girls stayed where they were. A bonus room appeared- the little boys’ old bedroom. Could it be? Could we have a school-room/office space? Would all of our homeschooling bookshelves from downstairs fit? They fit so well they practically look like built-ins. My large old IKEA art desk, with trestle legs removed, and snazzy new blue metal legs attached became a perfect work table. Six smart new stools joined the fray, and we were in business! Our school window looks out over our crepe myrtle, and we often joke that we are headed to the tree house for school. They also like to call it the drawing room (i.e. the room in which they draw and create) which makes James and I laugh every time they ask if they can go to the drawing room, like we live in some mansion.

Our first floor (our dining room and living room) is now strictly for relaxation and meals, and it’s really lovely. I’ll admit, it’s nice to have a clean spot to look forward to some days when the second and third floors are trashed. We all appreciate the fact that we can leave projects out in the school room and not have to tuck them away every time we need to eat. There is a door. And it shuts. It’s revolutionary, people. School mess? What school mess? I don’t see anything, do you?

It has made our tall narrow house seem to double in size, this change. Everything makes sense now. What is interesting to me is that it used to take about a solid two hours of us all working together to clean the house from top to bottom- sweep the rooms, mopping, dusting, vaccuming, making/stripping beds, hitting the bathrooms, deep cleaning the kitchen. Nothing has really changed except for the new arrangement of the rooms, but somehow we can bless the house (as we call it) in about forty-five minutes, sometimes less. I don’t know if it is because the children’s things are more centralized now, easier to see, and therefore easier to pick up, or if the different arrangement of furniture makes it easier or what, but goodness gracious, yes, I’ll take it! This of course helps with everything else- leaving me to focus more on the children’s schooling and my own interests. More time? How’s that for a home renovation?

Who would have thought? I think those designer people might be on to something. I do wonder why I didn’t tilt my head sooner…the only thing we actually purchased for this whole house renovation was four table legs and six stools from IKEA- about $25. I bet Joanna Gaines couldn’t beat that budget!