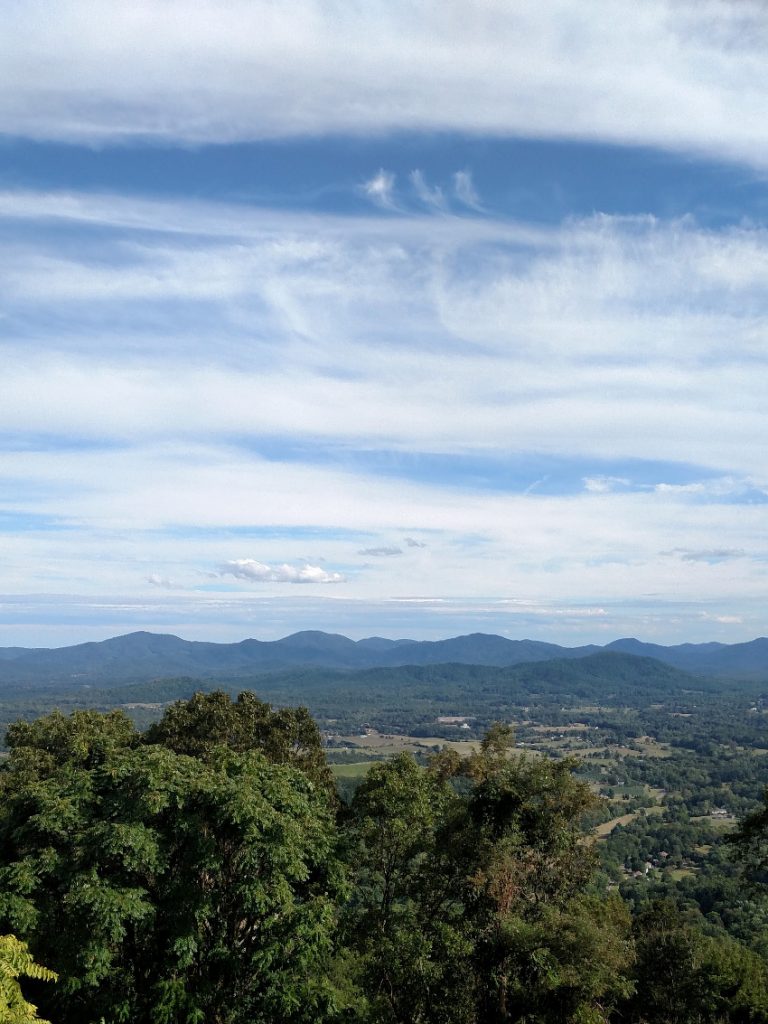 I remember the first time I ever passed through the Appalachians. I was eleven. I was born in the shadows of the towering Rockies, living nestled in the suburbs of Denver. My dad had joined the Navy when I was eight, and we had led vagabond lives since- first one house, then another, as he completed his training. The training completed, he headed out on his first assignment. We, in turn, returned to Colorado for a time, to visit with family, to tie up many loose ends, and begin our new Navy life in earnest. We drove across the country to head to the new place on the East Coast. The endless, monotonous flatlands of Kansas lulled my siblings and I into sleep as my mother drove. Missouri and Arkansas didn’t make much of an impression on me, except for when we crossed the mighty Mississippi River as we crossed into Tennessee. We’d manage about a state a day, finally pulling in to collapse into sleep in some hole in the wall motel off an exit. Tennessee itself took a very long day and I remember drowsing through most of the afternoon with heat and boredom.

She shook me awake not too long after we passed through mid-state.  Look, Joy. Look at the mountains in the distance. I distinctly remember being pretty annoyed at being woken for what, in my eleven year old mind, looked distinctly like foothills. I told my mother so, in annoyed, sleepy voice, and she laughed. I was under-awed by those ancient and bowed mountains, covered with green. They had no granite peaks, no snow caps, no startling thousand foot drops, no aspens. They weren’t mountains. They weren’t home.

I wouldn’t remember much about the Appalachians for many years, except for the occasional times we passed back through them on our way out West over the years on vacation. I preferred the more northern route through West Virginia and Kentucky, Ohio, when we did go, because the mountains were higher there. It wasn’t and couldn’t be my beloved Rockies, but at least the views were better.

My teenage years were very restless ones. I had lived on the East Coast for nearly ten years, but I was still an outsider. The rest of my family adapted well to the new challenges, or at least, they seemed to. I felt rootless. I would pay very little attention on those long car trips, always aching to cross the Colorado line, always straining my eyes to watch how the land would begin to fold slowly, and then more suddenly and shockingly, as we made the trek into Denver and back out again, headed for my Grandparents. Those mountains were my home.

Until they weren’t anymore.

It happened all of the sudden, the last family trip we took together before I would head off to college.

There was a ridge on the outskirts that I loved topping that last night of travelling. We always seemed to get into Colorado late in the afternoons and would be hitting the outskirts at twilight. It was always a beautiful sight to me, the twinkling lights of the city, the gray green foothills behind, the sun setting behind those dark sentinels of granite. It was how I knew I was almost there. Until the last time. The last time, we made that curve, topped that hill, and the scene laid out below was alien. Denver had quite literally moved up the foothills, obliterating them- there was no divide between urban and wild anymore. Everywhere there was dust, as years and years of drought had taken toll. The aspens were scraggly, and the Rockies had this horrible scarred appearance to them, shorn and naked as they were of vegetation that particular year. I kept telling myself I was too old to cry, they were just stupid mountains, but oh I wanted to, so badly. It was such a shock. It had also been many years since I had been there, and I realized in a rush that Colorado would likely never be my home again, and it hadn’t been for quite a few years. I just hadn’t realized it until that moment.

The years that followed that Colorado trip were some of the scariest, most tumultuous years of my life, as it is for all teenagers that are turning adults faster than they can keep up with it. I would make some disastrous and not-so-disastrous decisions in those years, all fueled by the fact that I felt I had no ties, no roots. I can see that all now. It’s always easier to see the reasons, looking back.

I would eventually find myself tucked into another fold of mountains- the Appalachians- when I began college. I resented them for it, for their rounded, smoky, blue-ness. I’d occasionally beg my friend turned boyfriend turned fiance to drive me up to Sam’s Gap in North Carolina so that I could gaze out over miles and miles of quiet peaks and imagine that they were just a bit rockier, a bit grayer.

When the whole world would crash down around our shoulders, my husband and I would make a long looping trip up into the Highlands that straddle three states, all hills and valleys and winding mountain roads. We’d drive and talk and breathe and stop and just stare at the majesty laid out below us. Before I even realized it, those mountains became more home to me than any home I had known previously. Now, my roots lie deep in those ancient hills. My children were born under their stars. There is a piece of wilderness there that has been woven into my blood- I’ve made love in those hills, I’ve buried a child there. The dirt and the cosmos of the place echo in my veins. I may not be there right now, living at a river delta on the East Coast, but my soul walks those hills every night as I sleep. My ancient hills. My home.

Every four or five months or so, the pull gets too strong, and we load up and make the days trip, spend a week. Sure, we could go on a ‘proper’ vacation, but we’d rather go home. Rather be with those we love. Fill up the tank, so to speak. It’s usually a crazy jumble of things and not very vacation-y at all- helping friends move, helping aging parents fix house things they can’t anymore, those sort of things- but we don’t mind. We belong here and they belong to us and it’s home. Do we wish we could plan it better sometimes? Sure. But the harrum-scarrum of it is half the fun. We come home oddly refreshed, when you consider what we’re up to when we’re up there, and we can carry on for a while longer. Until we can’t anymore, and those mountains call us back with their beautiful, ancient, come-home song. Beautiful mountains that they are, bowed by age. I hope I learn their song well.