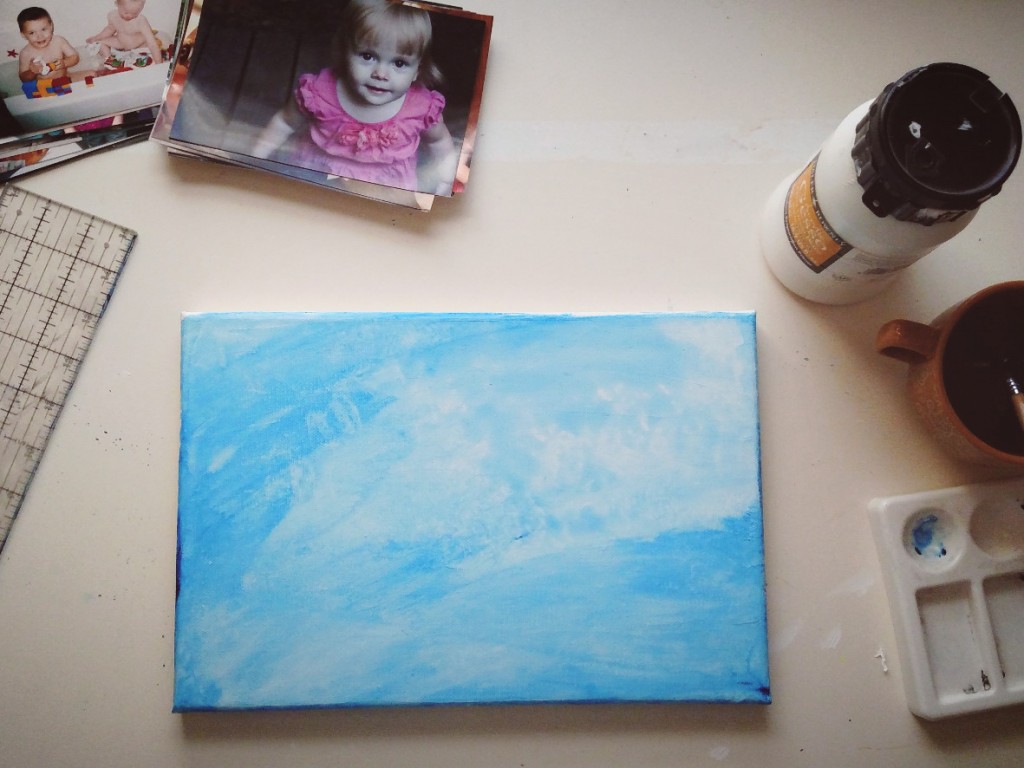 These clouds appeared on my canvas the other day. I don’t know where it is going yet, but I sure like the first layer! I never really do know where this will end up. It’s more about the journey than the destination.

I haven’t had a work in progress for ages. There are many reasons for that, most of them good. This summer was about helping my kids re-calibrate and re-center. I didn’t feel released into my own pursuits yet; there was a lot of healing that needed to happen. Sometimes some discipline and training, too- for mama and for the children!

That has begun to change in the last two weeks, and finally, I was able to slide upstairs and play in the paintbox. I’ll admit to putting it off for more than a week because my whole desk was covered in paperwork that needed to be filed. Eventually my better instincts took over and I shoved all the paperwork into a big grocery bag. It’s still there, I know where to find it, but sometimes life is too short to file paperwork!

I feel like I’ve had a lovely expansive period where I have just drunk deep from the well of inspiration for a while, especially via Instagram- and now it’s time to pour it out in creating something. Ebb and flow, this. Some of my favorite inspirations from Instagram are: [click for accounts] Joceyln Mathewes, Emily Jeffords, Beth Allen, Annie Barnett, Ruth Chou Simmons, and Kelly Sauer.

The playlist that often spins is a mash-up of The Civil Wars, Dave Matthews Band, The Last Bison, The Wailing Jennys, Nickel Creek, The Punch Brothers, Steve Martin (yes, the comedian. He’s an amaze-balls banjo player and well…just go listen!), and movie soundtracks like Interstellar, The Hunger Games, Harry Potter, Jane Eyre and cello concertos from the likes of Yo-Yo Ma and my personal favorite, Zoe Keating. I’ve had a ridiculous love affair with The Civil Wars and was pretty bummed when they broke up. I bought Joy Williams‘ new album with a bit of trepidation, but I wasn’t disappointed. I miss John Paul White’s voice, but was pleasantly suprised.

It’s somewhat ironic given my current writing series, but one of my favorites off the album is “What A Good Women Does”. There’s just so much to relate to. The kid’s favorite of the album is universally “Oh Mama”. You should see Josiah’s hilarious bum-wiggle dance to it. For all that, this is the one that was echoing through my mind as I was painting.

So there you have it. A work in progress Art Friday, chock full of inspiration. Bet you didn’t see that one coming, did you? I didn’t either. It feels pretty good.