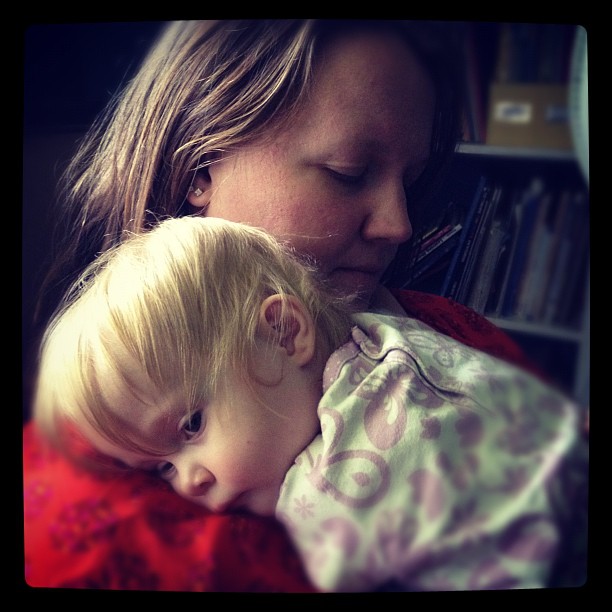 This picture was laying on my husband’s desk last night. It caught the corner of my eye as I passed by. The memory of it struck me hard this morning, stirring my coffee and looking out the window, the children’s laughter echoing in the background.

Oh that day. Ellianna was so inconsolable that day, fussing and sleepy but unable to settle to rest. I spent most of the day and night trying to calm her. I remember how exhausted and overwhelmed I was. The children’s schooling hadn’t been going well. The part-time job I was working from home was becoming frighteningly full-time, far more than I ever expected it to be. The economy had contracted, making our family very much house-bound, unable to afford the gas to go anywhere. Even church visits were curtailed, dropping to once or twice a month- the choice being whether to go to church or to feed our family. I was working so hard on so many fronts and it was barely a drop in the bucket of our need.

That day I may have had three or four hours of sleep, I’d guess. It was a pattern then. James and I would rise with the children, stumble through the morning. He’d leave for work, I’d dress the children, set them down at the table, start in on schooling. Rock the baby, change a toddler, correct some math, frantically evaluate lunch and dinner options, run the laundry, the dishwasher, the vacuum. Answer work emails sprinkled all through, my phone dinging relentlessly. We’d survive the lunch, the dinner, the witching hour, and into bed they’d go, and then the second half of my day would begin. Hours upon hours of work. Part of my job was fulfillment, meaning that I would have to pull and pack product, label with postage and prepare for mail. It was all stored in my laundry room. Pull, pack, label. Fold and hang a load of laundry while composing emails in my head. I’d eventually get to the end of my duties for that day, often far past midnight. Crawl into bed. Get up and do it all over again.

My husband and I never saw each other, two ships passing.

The day that picture was snapped, it was uploaded to Instagram. I don’t have a record of that day anymore, because I closed down and deleted the account that it was associated with. I imagine though, that it was probably something sweet. Something about rocking babies. Most likely, knowing myself, it was probably something happy. That’s what I’ve always done. My memory of that day is so sharp- how very exhausted I was. I remember rocking her, so very sad, wanting someone to rock me. Someone to come in and fix it all. But instead, I reached for the beautiful in my life, grabbed hold of the moment, clicked and added it to Instagram, and probably didn’t think much about it after that. And now I see that picture and I nearly come undone.

What I see now is how sick she was. We didn’t know then what she was fighting, but looking back, so much of her babyhood and early toddler years make so much more sense now. Why she was sick all the time with all these nebulous symptoms that acted like other things.

What I see now is how incredibly unhappy I was. I see the lines of exhaustion in my face. All I can see is the depth of despair I felt at that moment. I was so heart-sick.

A few months later, it would all come to a head. The lines snapped every which direction and our lives very much shattered. That shattering led to healing.

It ultimately led us to where we are now, a state away, a different job. The reason we ended up here was unclear to us when we first began the move. Not the fact that we moved, mind you, just where we moved. We laid our fleece in Denver, in Nashville, in Atlanta, and here. Sure, some of my family lives just over the water from us here, but this place wasn’t chosen for the nearness of family so much as it was chosen for the nearness of opportunity and a fresh start. It was all prayerfully laid out in a council of witnesses that were also praying with and for us. Every sign came clear and ringing that we were to come here.

We had no idea what we would face after we moved here. No idea that storms and battles we were yet to face. I look at the mama and babe in this picture and I just want to reach through time back to her, wrap her up in compassion and love, and give her the grace she was unwilling or unable to give herself at the time.

I felt that level of exhaustion in the days after Josiah’s last hospitalization. No amount of coffee helps. A nap just gives you a headache. It’s a completely out of gas feeling, one that requires a full-stop reboot, extra sleep, nutritional and vitamin support. So depleted. It was understandable of course, coming of the tail end of a week long hospitalization with Josiah, the surgery, learning new care techniques, caring for the other five children and the house and the continued recovery from my own surgery. But it was temporary. I’ve journaled out here over the last month about how I have stopped the clock, taken a staycation, and rested quite a bit, more so than I normally would, and filled the gas tank back up. I am no longer bone-benumbed exhausted, unable to form sentences, crying at the drop of the hat because everything is so overwhelming.

What makes me so sad when I look at that picture is how I lived in that state for over two and a half years, almost three. I thought I had to. I really truly thought that it was okay to be in that state of complete depletion and profound stress constantly because it was serving my family. I don’t even know how to unpack all that, but there it is. It’s something I’ve thought about quite a bit in the last month and a half as we’ve begun the slow recovery from all the medical craziness. In some ways, this last year has been just as intense as those difficult years were. The ongoing medical needs of two chronically ill children are certainly a factor. The person I am today and the way I deal with stress is very different now because of the lessons I learned at the cost of that very exhausted, heart-weary mother in that picture, and I want to continue to unpack that as I have time. It’s so important.

4: One Foot in Front of the Other.