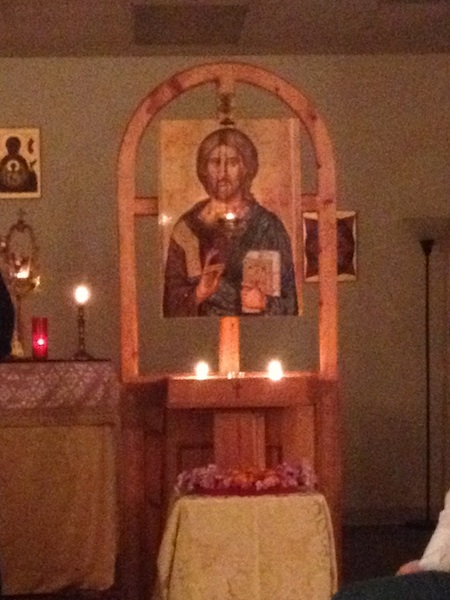 I slipped out of the bright sun of a blazingly spring-like March day into a darkened nave, the breeze slipping around my skirt and making the lighted candles waver. My children were following close behind but the door had closed on their chatter. The beautiful mingled scent of beeswax and incense rose to meet me as I lifted my eyes to meet the quiet, searching eyes peering at me from the icons around the entrance. It was a moment among thousands and yet, and yet- it was a singular, holy, consecrated moment that I will never forget. I felt the warmth build from the top of my head down to my toes, the butterflies in my stomach settling, the restless wandering feeling abating.

In that one quiet moment before the door opened again and my children, tumble-down, gurgling through the nave like a brook, my eyes filled with sudden tears. I knew beyond a shadow of a doubt.

“It isn’t Narnia, you know,” sobbed Lucy. “It’s you. We shan’t meet you there. And how can we live, never meeting you?”
“But you shall meet me, dear one,” said Aslan.
“Are -are you there too, Sir?” said Edmund.
“I am,” said Aslan. “But there I have another name. You must learn to know me by that name. This was the very reason why you were brought to Narnia, that by knowing me here for a little, you may know me better there.”
― C.S. Lewis, The Voyage of the Dawn Treader

It was as if the name I had always known was being spoken to me and I could see, could hear, could know that Heaven was close. It had been so very long for this wanderer. I had lost hope that I would ever find it, ever hear it again. So many doors I had walked through, only to find myself waiting in the hallway again, a little more shattered, a little more scarred, a little more hopeless. You see, I had been raised in the church, brought to the faith at a young age. I had moved many, many times. I watched whole communities shatter. I myself had felt the whip-sharp tongues of people who had their life all together and all figured out and had no room for sinners, for the broken. I was an orphan in the faith, with no home.

It’s hard to explain the loss I felt. I am grateful to know that I am not alone in this. I have met so many fellow wandering believers who have also felt abandoned by their churches, shut out, lost, believing but not able to gather in fellowship with others because they were so besmirched by their humanity as to not measure up to their local community, always on the wrong side of the door, often forgotten by the very people who should have been the first line of defense, the first hand to hold when one someone is slipping under the waves. There are so many, so much wiser than me, that are talking about the hows and whys and wherefores of this. It is not my place to delve into the theologies and thought processes. All I know is that it left me wandering and orphaned, desperately searching the Scriptures, wondering where the church of Acts had disappeared to, hopeless that it could ever be found.

And so it was that I found myself in that nave.

My children swirled in around me, the Bigs and the Littles, my husband gently shutting the door behind us. I saw it in his eyes too, everything like starbursts. He could feel it too.

A man came forward to greet us, attired in a long black robe. He introduced himself and welcomed us in. As we shook hands, my husband and I looked over our children’s heads at one another, smiling, knowing a kindred spirit when we meet one. He described himself by an archaic name- Subdeacon. It sounded strange on the tongue.

The service began a few minutes later. Two more men, dressed in long black robes and beautifully embroidered stoles that hung around their necks and buttoned down the front, approached the altar. They faced away from us. To the right was a young man dressed in a long robe embroidered over with crosses from head to foot, an altar server. After an unfamiliar prayer, the Subdeacon began to plain chant Psalm 104, a creation song of praise. The sanctuary was quiet, hushed. The glow of the candles echoed off the icons covering the walls. As the Subdeacon was singing, the priest was swinging a censer of incense and praying quietly. There were no bells on the censer, as they had been hushed for the season of Lent. I was struck by the incredible beauty of this sacred space; even in it’s Lenten sparseness, everything within the sanctuary testified to a beauty beyond knowing.

I don’t remember much after that, to be honest. Somewhere within the Psalm being chanted, tears began to run down my face. I remember looking over at my husband with no little amount of awe in my face and thinking. It’s really here. The church is really here. I’m really actually, finally home. This is mine to keep for as long as I draw breath. The sheer amount of relief that I had tried and I had tested and upon sounding the depths had come to solid rock left me gasping for joy.

When the service ended, the two priests came over to greet my family. It was an unusual situation, Subdeacon had explained. The arch-priest that normally came to serve the parish had brought a new priest with him to teach him the beautiful intricacies of the service within their church. The younger priest was able to sit with us a while and answer our questions. Again, kindred spirit reached out to kindred spirit. He understood so many of our struggles and explained in brief what it was we were seeing and hearing. I will never forget one thing he said as he explained how he had come to be a priest. He said that the day his church and his family entered into what he now called home, he had a complete and utter peace that he had shepherded his flock into safe harbor. It so matched my own feeling earlier that evening that tears began to gather at the corner of my eyes.

I had entered an Eastern Orthodox church that evening. Life would never be the same.