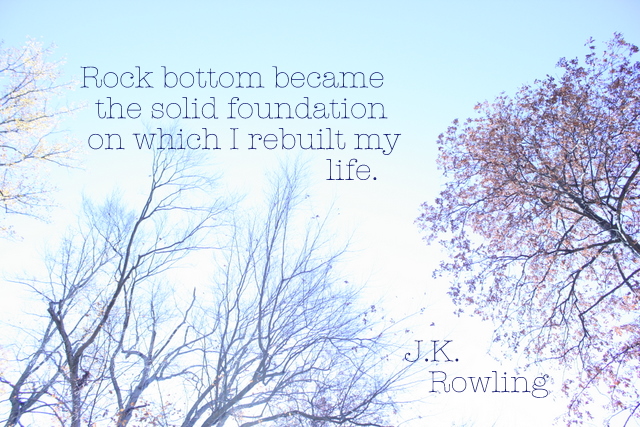 A few late nights ago, buried by work and stress, I happened to click on some iTunes extras that come with Harry Potter and the Half-Blood Prince, selecting “J.K. Rowling: A Year in the Life” filmed by James Runcie.

I have been a somewhat passive fan of the series over the years- never having read the books, and (up until last week) have only viewed two of the movies, the very first two- before life took over. As a matter of fact, Harry Potter and the Chamber of Secrets was one of the last movies I ever saw in a theater on the big screen, years ago. Harry’s journey was just beginning as I was getting married and having my first children. And now, a decade later, the books and the movies have finally come to their fitting end. I don’t know what inspired my sudden binge upon the movies in the last few weeks- but I have now watched all the way up to almost the end- and am patiently waiting for Harry Potter and the Deathly Hallows Part 1 and 2 to arrive via Netflix. I haven’t stalked the mailbox like this in ever so long. Oh, I could easily find out the ending, read the books from the library, but there is some deferred gratification in waiting.

Anyways, James Runcie and JK Rowling. I would never have imagined that a documentary like this would leave me so moved, but it truly did. I don’t know how much of that had to do with having Harry’s adventures so fresh in my mind as I watched; but move me it did. It’s been on my mind ever since. There’s a particular spot where she is sitting in St. Matthews, the Anglican church that she often cleaned as a young girl…Mr. Runcie is asking her some questions regarding Harry and her faith, and I found so much within what she says that truly resonated with my own journey. But perhaps the part of the documentary that affected me the most was her description of the dementors and how they related to her clinical depression- and a few moments later she says the quote above. At this point, I was fighting tears. Not in sadness, but in hope; I am at year three of her twelve, and look, look, where adventure has taken her!

It was a fitting closure to a long three years I have faced, I believe. I could not have chosen a better companion in it than to watch this documentary, to help me close the chapters, move forward. Things are not so dark now, as they were; although I think JK has nailed it well in that the dementors always leave a mark upon you, and you’re never quite the same…things for me will always be colored by the battles I have fought in the last few years. But I hope the true benefit in it all is that I have truly torn back to rock-bottom, learned to build on the Rock…my faith is not a faint thing for me now. It pulses through my veins in a way it had not and perhaps could not before the storms began.

It’s interesting, standing here, looking up. I wonder what my next decade will look like. I used to regret the loss of a near-decade to immaturity and depression; now, I understand it was necessary for the foundation to be rebuilt, and that is a worthy cause, not something to be shunned. In its truest sense, Runcie’s documentary of Mrs. Rowling left within me the question of what I really loved, what I really wanted to pursue, what I keep feeling called to, where my heart turns. It clarified some of the stress I was facing. Noted what was worthwhile, and what was not. It was not all the documentary, I must say- the documentary is a corollary to a lot that has been going on within my interior life, but as sometimes happens, the visual brought to life the thoughts and dreams, and crystallized within me thoughts that needed clarifying.

And now, there is the onwards and upwards. I’ve been crawling towards it, desperate like, and ever so slowly, I’ve found my feet again…and now, to run. May I run well.