Time has been interwoven with many things since I was last here.

When I left, I had become seriously ill, writing from the hospital; I would end up spending a week and a half there with a pseduo-pneumonia that left me breath-less and voice-less. Now nearly six months later, I am still ill, and have embarked on a new journey of understanding what I must do to take care of myself and how to handle this new reality: I have a type of asthma called intrinsic asthma that does not respond well to medication- the inhaled medications that help most asthmatics to breathe. In addition, over the last six months, I developed an allergy to antibiotic medications- those medicines that help fight infection. If I were to catch a simple cold from my children, or develop any sort of sinus infection or upper respiratory infection, the chances are near 100% that I would again be hospitalized- and more frightening still- since I am allergic to the medications that help fight infection- could become extremely ill without much of hope of recourse. It is a reality I am struggling to accept.

And while the season has been darker than in times past, there was a delightful, bright spot on February 9, when a certain wee lady arrived, to our family’s sweet delight- her name is Elliana Grace. 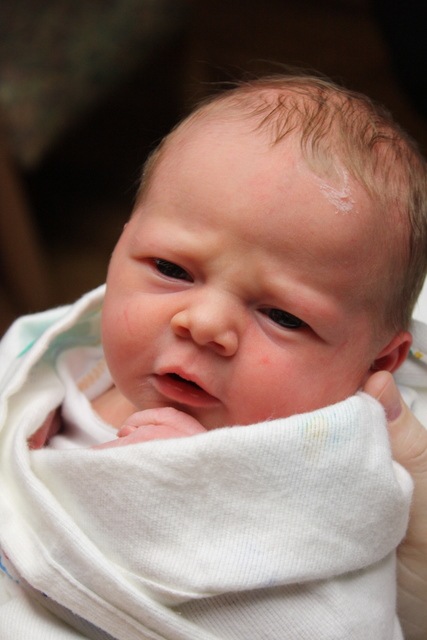 I had not had the chance to share the news of our pregnancy here before I shut down the blog- but those of you who friended me on Facebook learned the delightful news from James when he was posting updates from the hospital in November when I first became sick.

I am a mama of six. And I find it hard to believe that the wee girl is already growing, weed-like, at leaps and bounds- and is already nearly 12 weeks- 3 months- old.

There were other things- a change of job to a much more saner, solider position back ‘in town’- we actually get to see our daddy and husband now- which also meant a move back ‘in town’, to a house on a hill in a quiet neighborhood- but the craziest part of it was that it began literally days after Elliana’s birth. She was delivered by c-section due to the many issues with my health, and also the fact that she decided to stay breech.

I would be lying if I said that it was all okay- it was not- these last months have tested my endurance and my faith in ways I am just beginning to understand. But I would also be lying if I left it there- I feel this time of Advent and Lent was a time that God had planned for me- and it has been rich and good in His own ways. I have watched kronos and chairos time weave together in bright knots on the tapestry of my life- and I think- for all the sickness and struggle- I will always look back upon this time with gratefulness.

There is more to tell, but I will leave it here for today- it feels good and right to again be breathing in this space. I’ve missed you all, and the conversations to be had, the lessons to learn, the laughter to be found. Glad to be back.