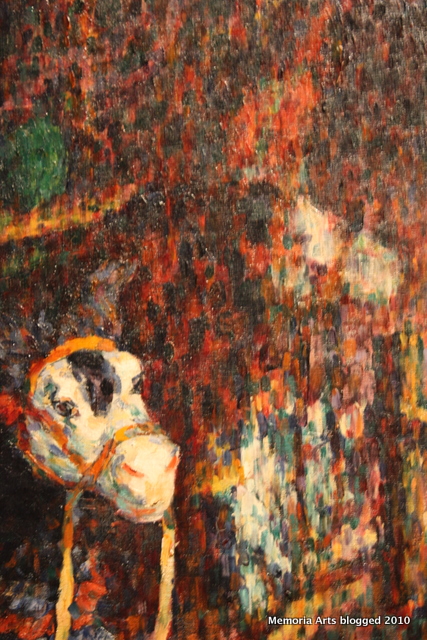 The bees were swarming the other day. They were on every limb of the fruit tree out side my kitchen window, they hummed over the garden, they circled dizzy swirls over the bedraggled grass in the yard. As I tiptoed out to the mail box, stepping carefully so not as to madden the industrious creatures, I found it a bit disconcerting. Everyone has talked about how the bees are disappearing, colony collapse disorder, and here, it seemed- was the entire population of bees in East Tennessee flitting over the overgrown acreage of our barn turned house. They did not seem so fragile at all. There was every kind I could identify- carpenter and honey, big fluffy bumble bees. The vision of them spinning in the grass reminded me of an impressionist painting I saw at the Chrysler Museum not too long ago- utterly fascinating, yet somehow- discombobulating. It was what it was, and yet it wasn’t. The same with the bees. They were there do a job- but yet the sheer numbers of them was almost frightening. And I’ve never quite heard anything like it.

They were at it all day. And the next morning…all was quiet.

My life has felt a bit like those busy buzz bees for a long time. And I remember in the dizzy swirl of it- wondering, disconcerted, if this was all my life was– the is and yet isn’t. I was on a freight train to nowhere. Even now I wonder if I’ve punched my ticket again for the rail line- but at least now I can see it for the barreling beast that it is. The crazed circles I have flown over the last six or so years would make anyone tired. And then, when the slam of pain and loss derailed- what did I do but get back on? Busy bees, always buzzing. I remember, frantic, last year- in the haze and fog of Postpartum Depression- almost feeling a bit mad in the head- if I had gotten it all wrong- what if this was all life was- delirious swirl?

But somewhere deep at the core of who I was, I knew there had to be more. And less, in a manner of speaking. There had to be a reasoned, ordered, peaceful existence- somewhere, somehow. That is not to say a life without pain- because pain is always attendant- as He said it would be. But a life lived with meaning. But try as I might, I could not find it. I grew frustrated. I prayed the Psalms, utterly mad at it all, this life that was and was not.

I just could not fathom what a buzz bee free day looked like- that dream like state of quiet fruitfulness. (At least, it seemed dreamlike to me.) My husband and I had been praying…hard. Unfortunately, it is often what we do when we are left with no other options, instead of being our first line of defense. We prayed. I despaired. We prayed some more. And somewhere that quiet cool place inside my heart that I swore had to be there somewhere began to bloom. It is funny how prayer changes things- more often it changes us than we change God- and over a tick tock of time that seemed infinite (but a blink to Him)- my vision changed. I could see the blur out the window of the wreckless train I was on. Our priorities shifted. It was a strange, upside-down place to be when we realized that we wanted off the train, that we wanted out of debt, that we could care less what the Joneses were doing, friendly neighbors though they be. It was in the chill and hardness of winter that faith was blooming for me again. It still seemed bleak and hopeless. James had no job. The children were growing inches in days and consuming food like an invading army. We battled ear infection after ear infection in the little ones, and I felt bereft. And yet- there was hope. Could there be a way-station off this train- would it stop long enough for us to dive head-long into grace?

This blog grew quiet in those months. January poured into February, then March, then April. May, June, July. I scribble here occasionally, but I felt so pressed to quiet that I have not said much. A few dear friends, online and off, have encouraged me to tell of it now. I feel unfit for the task- I find myself slamming hand over mouth with Job- I am not fit to speak. That is a strange place to be, me who spills words. But now that I find myself looking back on the time, feet placed on new paths, I realize that I ought to spread out the map and say- see this here- this hill, that valley- because maybe you too face a journey like mine? It started there, in the bleakness of a frigid winter where there seemed no way out. It ends in the sunshine and summer of an Appalachian day. Lord willing, I’ll count out the journey for you in the days to come.