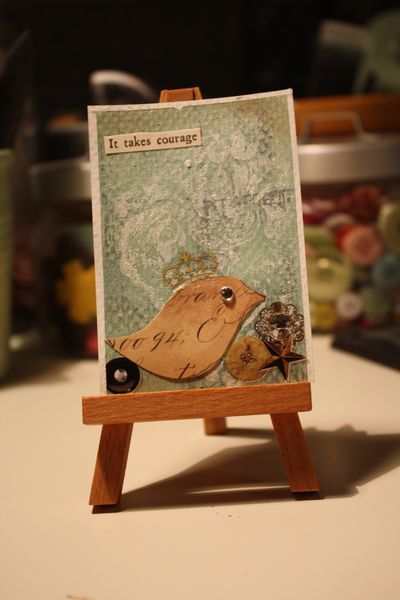 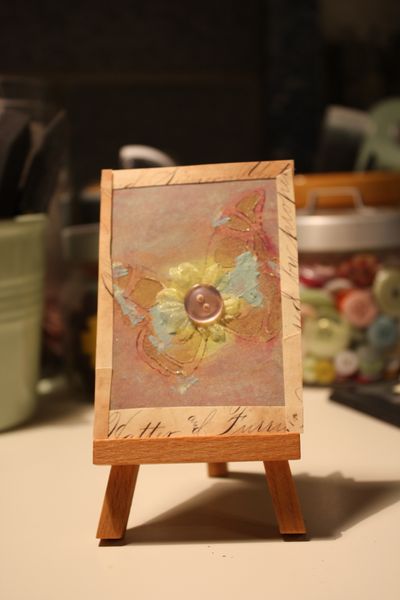 (Sorry for the harsh lighting…I wanted to get these posted, but didn't remember to take pictures until long after the sun went down.)
The one on top (also in my banner) was from last week. It was the first time I was playing with a color washing technique with acrylic. I really, really love how it turned out. Even a 'mistake' (I've had mentors remind me there is no such thing in the artistic pursuit) turned out alright- it was a Chinese writing character stamp that I thought would look cool in contrast with the color wash, but it pretty much turned out as an awful black smudge with no contrast whatsoever. But somehow, it totally worked out in the end…gave it this nice aged patina look. And of course, the Heidi Swapp damask stamp. It's pretty pathetic how many things I do end up with this stamp on it somewhere. I don't know where the bird came from- I cut it freehand from some old Nostalgique scraps I had. It just sort of hopped out of the scissors, and it said it needed a crown. And the rub-ons were some very old Melissa Francis buttons. I mean seriously, bottom of the scrap drawer products that I've had forever. And I love it. Maybe I shouldn't constantly try to reinvent the wheel, methinks. Definitely channeling Mrs. Rebecca Sower here, for sure. Who got me into scrapbooking in the first place. Full circle, no? This ATC just speaks to me…it just seems to ecapsulate where I am right this second. The peaceful blue-green. The bird. The jewels. I look at it, and I think, "I can do this." So I found the "it takes courage" line…it's perfect.
This week, I was still obsessed with the color washing technique. Pam Carriker had an article about it in Somerset Apprentice, and it's really captured my imagination at the moment. I love how it's deeper and milkier, almost velvety, than watercolors, but has a watercolor "look". So this week, I played with three colors instead of just the one. I also used a Heidi Swapp butterfly mask with some Making Memories glitter paint in the middle…a wee flower and button and it was done. The edges are scraps from last week's bird.
I don't try to analyze what I create with these ATCs. I think it's sort of the hardest part, really, the "not thinking". And the most enjoyable, at the same time. But I can't help but notice that for the last two weeks, I've picked a bird or a butterfly as a motif- I definitely feel it. In my heart. Like it's time to soar, to go. To where and what, I have no idea. But I feel it. Love that it's coming out into these little attempts at creative thought. You know, this is #6. And it's April. I said this project was going to be a weekly thing- I am way behind. Normally, that would drive me nuts, absolutely crazy. I would create just for the sake of getting it done because "I said I would". But you know what? I am totally okay with this being what it is. The whole point was to let go and just play and this is way too much fun to force the issue. It's filling me up during a time in my life when I really don't have any time to really create, to scrapbook, knit, or sew. I love that I am still getting to explore and play and paint, but that it's not so intensive that I feel loss when it is days and weeks before I can get back to the project. Fifteen minutes. I can do fifteen minutes.
Speaking of which, I am really loving the Somerset Apprentice. It's the premier issue.  The byline is "Artful*Building*Blocks" and it really is. So many of the projects featured have more than one application of technique. Lots of instructions and close-up photos. And the artists! Angela Cartwright, Pam Carriker, Michelle Ward, Claudine Hellmuth. I am self-taught, so this is right up my alley. It's really helping me to spread my wings beyond 'traditional' scrapbooking techniques.