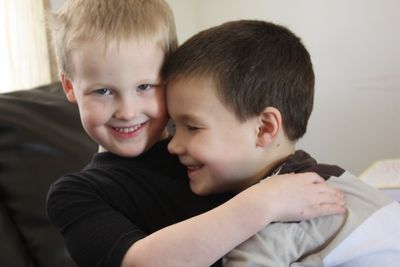 Rule #1- If it's too quiet, it IS too quiet. Disaster will ensue.
Rule #2- The (in)capacity of a toilet is directly related to how many toys have been dropped in it. See rule #1.
Rule #3- Kid's laundry will mate in the laundry basket like bunnies, and one outfit suddenly morphs into fifteen. Your ability to find a matching pair of socks is inversely proportional to the reproduction rate. (And how does that dirt get so deep?)

Musing yesterday about immaturity and how it has related to my mothering skills has really gotten me thinking. I've been reading The Mission of Motherhood by Sally Clarkson, (see the link in my side bar) and she discusses many things that I have been slowly learning myself. Sloooooooooowly. Have I mentioned I am a bit hard headed and a bit opinionated yet? Bet you never would have guessed, right? I find comfort in the fact that Peter was really hard headed too, and Jesus loved him deeply. It gives me hope that it won't take me multiple times through a lesson to finally get it. *deep sigh*
It really does seem to me like I've learned more this last year than the last six years of mothering combined (Ben, on the left, is almost seven). I can't quite put a finger on why, exactly. Perhaps it is because my oldest is moving into the elementary age- he can speak clearly and express his feelings in a way that he really hadn't been able to before. Suddenly, I am getting feedback on all this mama stuff. Sometimes it's really sweet, but gracious, the first time a child tells you that he hates you and that he wants the other parent….well…it's a whole new world. Perhaps, it's that this last year has been such a cruicible in so many ways. Sink or swim time. No more cruising along on fumes of faith. Suddenly, I had to really decide if I believed this God of mine, really and truly- that He would be true, that His word was true, that He was faithful, that He would sustain me through the darkest waters I have ever seen in my life. Head knowledge, head belief, suddenly had to move down and be applied at a heart level. Intellectualism had to give way to real-life-ism, practical application of what I believed. It was no longer a question of whether I could get along on my own power- we quite simply would not have made it through without God's mighty sustaining hand. It was He that provided and is providing. I understand this, fundamentally, to the core of my being.
And no where has this been more true than in being a mama. The process has helped me realize that there is a huge difference between intentional and reactional parenting. (Is that true of faith too? Intentional, faithful belief, or a life insurance policy that only reacts to crisis? Hmmmm.) Like I said before, I did not tend to see things as part of larger picture. Instead of digging down to the roots of a problem with a child, I was pretty reactionary. I'd let them carry on for hours, and then, all of a sudden, get so fed up and yell and holler myself, send them off to beds to calm down and learn how it's not right to yell and carry on, and then go right back to whatever it was that I was doing. And then wonder why they weren't "getting it"?! I wasn't starting at the foundation, in the calm moments, and explaining and showing to them which voice was right to use inside, and working with them through out the day on learning the right voice to use. Then it would make sense for me to send them to their beds to think about it! Because they'd know the lesson they were learning. Perhaps losing a child has made me realize that mothering is not a marathon, in a way. It's a short race. A short eighteen years to instill in them a lifetime toolbox of faith and knowledge. Eighteen years in a span of a lifetime is less than a fourth, but that slice of time determines so very much for my children.
In the early days of infancy and preschoolers, it seems like those days will stretch on into infinity, they will never end, you're never gonna get a shower, and you'll be changing diapers until you're old and gray. But then you blink. And suddenly, that little baby is an awfully big man-child asking some pretty pressing questions about life and love and all manner of things and you realize you can never get those stretching moments of time back. They're gone, and some of the lessons you forgot to teach are suddenly staring you in the face. And he's only a third of the way through childhood! What are the next two thirds going to look like? Thank the Lord for heaven's grace…the next two thirds can look a bit different. God is a God of second chances and new beginnings. It's been a hundred and eighty degree turn for me…The need for prayer and guidance, the study of the Word, is so much more obvious to me now. I know I have to check in with God and learn His ways myself or I am just spinning my wheels…I don't want Ben to hit fourteen and still be struggling because I haven't taken the time to diligently and consistently teach him the ways of the Lord. It's not fair to him. (And while I am mentioning Ben, it's true of all of my kids.) God has giving me the precious and amazing gift of five children to steward, and it is with a deep regret that I realize I haven't been treasuring them properly, treating them with the respect such precious gifts deserve. God clearly had a plan when He decided to bless me with kids, and isn't high time I started asking Him what that plan was?