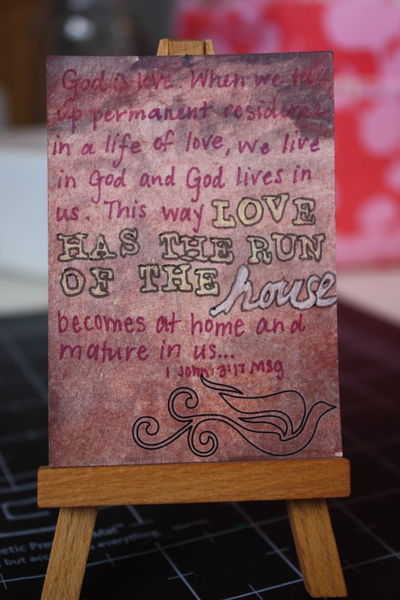 Friday came and went on this one. I started it earlier in the week, but then couldn't get back to it until the weekend. In the olden days, I would have grown discouraged and not finished, but I am really committed to trying to complete one of these each week. I am beginning to make space for this little adventure, even if it means that I'll have to stay up later taking care of the laundry or what have you- it's a sacrfice I want to make. I've been working through The Creative Call by Janice Elsheimer, and I am slowly growing used to the idea that these little attempts are a form of worship. (See link in side bar for more info on this book). I think I have often separated "art" from "life" and certainly "art" from the "spiritual journey", a sort of divided kind of thinking that I have talked about before. I think this is a disservice. I think of friends whose talents are varied and numerous: one paints with words, another with pictures, still another by painting, and so often, these are extensions not only of themselves but also a reflection of the Creator that made them. I am beginning to believe that art is not just for "art's sake" but as a way to consider the journey. The ATC this week is clearly influenced by what has been going on in my journey with Christ, but also with others within my community, and when I started this one, I knew exactly where the end result would lie. The background, which is metallic watercolors using a Heidi Swapp damask mask, is directly related to the background of the slides used in worship at church for the last six months. You can see an example here. The verse, which was both hand written and stamped, was from 1 John, which our church has been studying since September. I chose The Message version because I was so caught by "love has the run of the house" phrase…this is truly my prayer, that love would have the run of the house, both within myself and within my home, my life. As I worked on this card as I had a little snippets of time here and there, I was struck by the process. Each layer of the background had to dry before the next layer could be applied- first gold, then the mask with a custom mixed purple, then the ruby over top of it all, the careful lettering. So often I try to rush love, to push things through, to rush sanctification. But it is above all, a process, careful, considerate steps on a narrow way. I don't think I'll be able to look at this card and not think of it…this has to be one of my favorite cards so far.