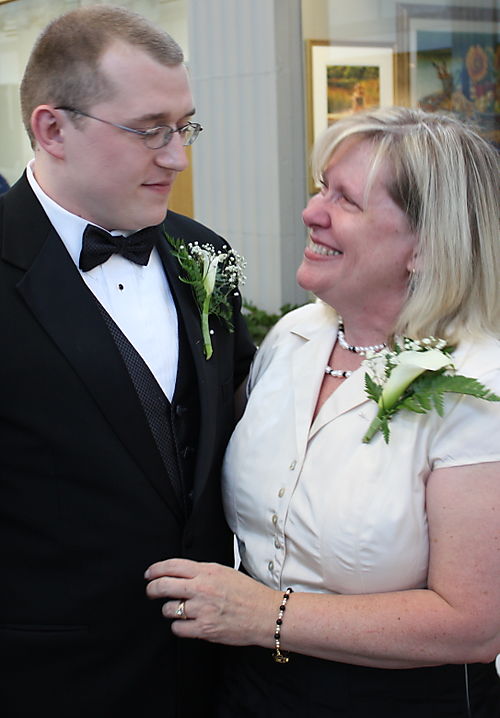 I try not to get just a wee bit teary eyed when I look at this picture…mom and son. Mom trying not to cry too much, son stoically trying to act like nothing's changed- when everyone knows that everything has changed. Weddings are such profound milestones. I've known this family for a long time…I know their stories. The son and I have been the closest of friends for many a year. He is as a dear brother to me. I've loved his mother as my own for nearly as long.  I found it disconcerting when I responded the way I did to this interchange between them…I was so dumbfounded by how little time was left between now and then. How that was going to be me in a few short years, with Ben and I in this picture instead of them. It galvanized a million thoughts in my head regarding mothering. Could I be as confident as she was in the son standing before her? Would I be as open and willing to let go?  I saw my reward in this picture. The reward of a son that 'stands among men' with integrity and strength… the reward of knowing that the job was well done and it was time to let him go, knowing that he would be a wonderful husband to his new wife…these are a mother's gifts. Yet at the same time, I realized that time was short- Ben, Isaiah, and David may be young, but twenty years flashes by in a blink. I know, for I witnessed it this weekend! There are careful lessons I have been shirking in the here and now because I have lost sight of the goal. It was an amazing thing to have such a clear reminder set before me this weekend. It has given me strength for the journey in mothering my rough and tumble boys. Not only did Tony survive those rough years, he has become a man that I want my children to know, to emulate. He is one of those examples my husband and I point to when we talk about being men of honor. A man full of compassion, kindness, and strength. A man who never shirks what is before him. Yet, he is also has a merry heart…you cannot but be around him and be in some fit of laughter. He is one of those people that you meet and your heart relaxes, and you are reminded that there are still good people in the world.  He gives an awesome compliment to his mother in his character. May I be as proud in my boys as she is in him come a few years hence!