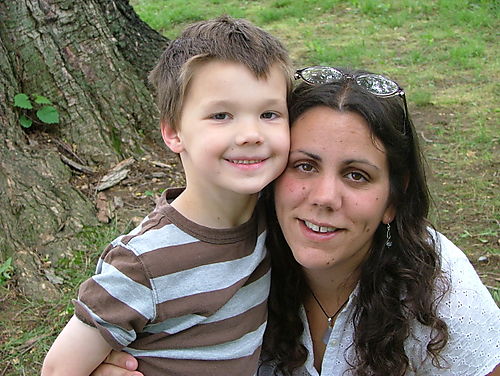 At first, I was a wee bit jealous of her. Up until she came along, I was the only woman in Ben's life. I was pretty happy with that. And then this interloper came along. She was the sun, moon, and stars- Mrs. Shanna this, Mrs. Shanna that, Mrs. Shanna read me this, Mrs. Shanna told me that…it was a long list every day after school between bites of snack. It caught me off guard- I thought I was queen of his heart for a few years yet! Alas…

I do say all this tongue in cheek, of course. And I can't say I exactly blame him. She really is that sort of wonderful: A rare jewel of a teacher that is both down to earth and reach for the stars at the same time, who can make her students laugh and think 'deep thoughts' in the same breath. Under her attention, Ben blossomed into this amazing architect kid who could draw for hours and sign his own name~ a side of Ben I never knew existed. He learned his three R's under her too…but most of the lessons were heart level for Ben. She helped Ben deal with being the oldest of four with a brand new baby in the house; she helped him talk through his feelings and deal with his frustrations; she encouraged him to make the final hurdles in potty training that we just couldn't get him to do at home- and that was all within the first month of school!

If you were to walk by his classroom on any given day, you'd probably see Mrs. Shanna and Ben…Ben was literally in her hip pocket most days, helping with getting snacks, cleaning the classroom, answering the phones, sitting close when she read to the class. He was one of the quieter boys in the class, and she made sure to include him… like "two peas in a pod", she would say.