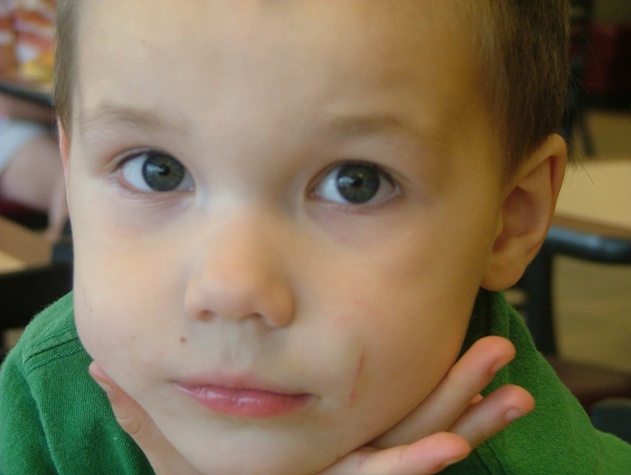 See Case Study 1 (Ben and the collision with the bookcase after kamikaze jumping off the train table), and Case Study 2 (Isaiah, poor clumsy kiddo, and the concrete front step).

If there was ever one thing as a momma of toddler boys that no one warned me about, it is their propensity for getting injured in the oddest of ways. Particularly because, so often, they have just been told not to do said kamikaze stunt by their momma, because they will get hurt. Do they listen? Will they ever understand that I am trying to save them pain? Heck no. They’re boys! Bruises and bugs are written into their DNA.

It used to really freak me out. I would get so upset that they were hurt and in tears. I just wanted to wrap ’em up and snuggle and tell them everything was okay. But all they want is a kiss (because Mommy’s kisses have magical healing powers, don’t you know?) and off they go on their adventures again. Now, I barely blink, unless there is actual blood involved.

But you know, as a mother, I realize my kids are forever teaching me. The lesson: it’s just a bruise! Five years ago, I would hardly try new things…I craved stability. Sameness. And I am sure there is a need for that. But the boys have taught me that it’s okay to try something new, something a little bit crazy, a little kamikaze even. Nine times out of ten, great things can happen ("Look Mommy, I made it all the way across the monkey bars!")…and that one in ten? It’s just a bump. It’ll heal. It’s a badge of honor for conquering fear. Now, if only I could conquer my fear of the bugs they keep finding to "show" mommy, I’ll be doing great. Baby steps, people. Baby steps. (And then, if Isaiah could conquer his fear of walking in a straight line for longer than five feet without tripping, that would be, as the boys say, waesawome.)