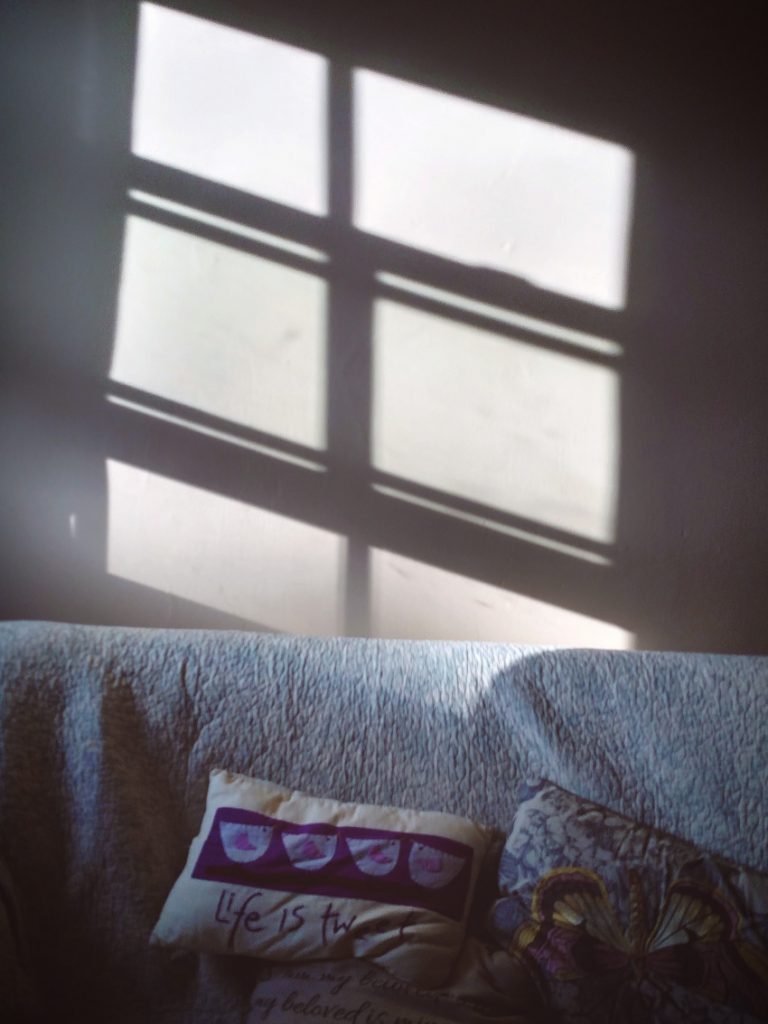 “I’ve come to believe that in the very midst of the burning dumpster fire of the Not-Yet the practice of cultivating joy and happiness, noticing the good and the beautiful and the true and the pure isn’t an act of betrayal of our solidarity but instead a very real act of prophesy and invitation to the Soon-Coming-And-Right-Now-Already of the Kingdom of God. We are sowing seeds of faithfulness to the way it will be, for the vision of the world we want to see come to pass, world without end.”[…]”In a way, it reminds me of stories my Granny used to tell me of the war years, how they made every effort to keep things as normal as possible to keep not only their own spirits up but because they believed it would demoralize the enemy, how even the regular ordinary beautiful things became not less important because of their suffering but even more important.” – Sarah Bessey

I’ve thought a lot about fear lately. It’s hard not to miss its effects in an election year, in a hot, oppressive summer that bakes the ground to barrenness. There’s a lot of epithets that get slung ’round by this person and that person, our tilt a whirl media frothing at the mouth. Fear’s ugly fangs seem quite obvious in that context. Less apparent though, is how fear slithers about our ankles, tripping us up at the first sign of trouble in our daily walking out of our lives, our purpose. How it crushes you until you can barely breathe. It’s insidiously quiet and categorically destructive.

I’m looking over the wreckage and it’s sobering.

I wish our American health system had better words for things, better bedside manner. Learned how to talk to the humans sitting behind the diagnosis. Learned to talk about the hope instead of the fear, learned to talk holistically instead of systematically.

We’ve had no fewer than twenty seven major medical events in the last few years (and more than a smattering of major life events separate from that, financial reversals, etc):

An average of three or more major medical events each YEAR.

Of all those, maybe five or six of them happened in such a way that we knew what was happening and felt comfortable with both the treatment and what the doctors were telling us; that is, while the news may have been bad, the doctors laid it out clearly in a comprehensive way that did not solicit fear or many unanswered questions.

I highlighted cancer scare for a reason. We have had friends and family near and dear to us be diagnosed with cancer. We’ve watched as friends have died of cancer. We’ve watched our extended family go through a very long journey with a child with cancer. Cancer is scary for a reason- if it isn’t fatal, it is a long, protracted suffering that might lead to healing or might not. When that word gets pulled out of the ether in a medical office, the connotation is clearly and dreadfully highlighted. When the word biopsy is mentioned, it, too, has a frightening connotation. And friends, our medical establishment brings the word up far too often, far too quickly, often out of context. I don’t say that lightly.

Having been subjected to a cancer scare four times now, it’s the worst four to six weeks of your life. You walk into an office and think that sure, you’re sick, but everything is okay and the doctor will figure out what to do, and then five seconds into the discussion, “We think it might be cancer” blindsides you. It’s bad enough when it is yourself. It’s another thing entirely when it’s your child. I can’t express to you the terror that rolls down your spine and makes you break out in a cold sweat. Our American medical system needs to have a better approach to health care, period, and we especially need to talk about how to talk about illness in a holistic way. Period.

When I look over that list, so many things war for my attention. I see the wreckage fear has played. I see just as clearly every single place God was faithful to us, where God provided for us when we thought we couldn’t handle one. more. thing. They present to me in a synergistic way. I couldn’t separate the two opposing viewpoints if I tried. I see why both my husband and I struggle with anxiety, a PTSD of sorts when it comes to medical things and mail boxes (where those awful, dreadful bills come from). It wasn’t all in my head; it really happened. It defines so much of who we are now, so much of who we’ve become, our relationships with each other, and our friendships.

I see how fear has been driving me to run.

I needed closure. I needed to turn to the next chapter. Our current reality probably won’t change much any time soon, but I needed to take a step back and re-focus my attentions. I spent time going through all of my social media (including this blog) and archived vast swaths of our story from the last few years. I read back through one hundred and forty blog entries in which I basically said the same thing over and over.  I’m scared.

It is a very raw, very precious story that needs to belong to just us now. Sharing our story at the time was the absolutely right thing to do, and it is just as absolutely right now that it returns into privacy. I don’t know what I’ll do with it, if anything, in the months and years ahead. Maybe it just gets kept for our children when they get older. Maybe I write a proper book, like people have been encouraging me to do for years. I don’t know. But I need the closure here. I need this to be my safe space once again, where I can be myself, not completely subsumed and defined by this medical tiltawhirl. We are working on a path forward, and I can’t focus on the things I need to do if I’m constantly looking backwards. It’s over. It’s done. We have two chronically ill kids. The financial wreckage of the last three years will take years to put to rights. This changed our life. But it is not who we are. It is not who I am. I will not be defined by fear.

I’m using normal as a defense against the Enemy. He has no power here, and I will combat him with all the things that bring life to me and death to him: the sound of my child’s laughter, the way a paint brush moving across a page fills the whole sky with hope. The beautiful, the true, the pure.