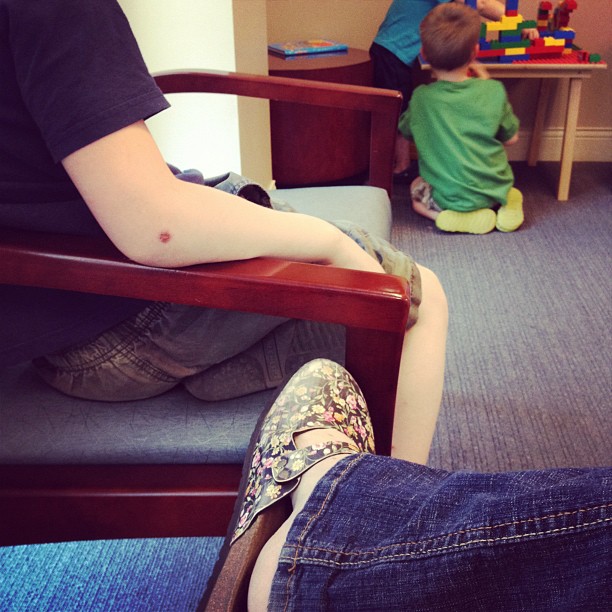 And just like that, all of our first days of school plans went right out the window. Thankfully,  we got to attend one back-to-school picnic and get the kids enrolled in co-op for the year before the germ train arrived, full speed ahead. Isaiah woke up on Wednesday with a strangely swollen eye, and four of eight of us coughing hard. We ended up in the doctors office for Sir Swollen Eye, and it ended up taking the entire afternoon. It is bad enough to be in that position with one or two sick children- it’s another entirely when all six are feeling poorly. And to the quiet, patient Pharmacist at Target, who spent the better part of half an hour chasing down a doctor so we could get the right medication…thank you for understanding and entertaining the kids. I was feeling so poorly myself I could barely keep it together. It was supposed to be a quick in and out trip, ten minutes tops. An hour and a half later she had finally wrestled the insurance and the doctors office into semblance of order, and we were able to get what we needed. She’s a special hero to me.

Today we’re tucked quiet into corners, beds, couches, and the like, hunkering down and letting things take their course. Isaiah’s eye and face still aren’t responding to the meds as much as they should, so we’re watching and waiting. I’ll let you know how it goes.

In the meantime, I’ll leave you with this. I loved what Amanda had to say the other day about sickness and convalescence:

And that’s one of the very things I’ve been thinking a lot about – the idea of convalescence in our lives. The lost art of convalescence, more specifically. Because we have this expectation of ourselves (and each other) in this culture and modern world of ours, that in times of being sick, once we’ve popped the magic, instant cure-all pill, we then promptly rise from our beds and return to our regularly scheduled work and paycheck, school and datebook. …Continue reading