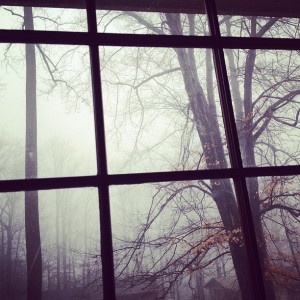 Elliot’s words sum up the wanderings of my days- the quiet stretches where the silence lengthens. It is so different to be still; to stand on the beach on watch the waves crash over your feet, instead of bobbing with head barely above water out there in the crashing blue. I’ve understood enough to know now that I need a proper ocean-going vessel. No more desperate dog paddling to nowhere. And the waves crash a rhythm: His love endures forever.

So, to find the boat, the kindling scraps and the big logs to carve into canoe? The next steps. The biggest logs, the Word, strong and true, committed to memory. Studied. I’ve too long let the practice fall. Another scrap I found by serendipity at the library, selected on a whim, and eyed somewhat suspiciously- The Shaping of A Christian Family (Elisabeth Elliot). I didn’t know what to expect.

I began reading it Sunday morning. We were home, missing service, with too many littles coughing and generally germ-y; a gift we thought best not to share. It was like reading a story straight out of Grace Livingston Hill, as Elisabeth describes a life that any heroine of GLH’s might claim. But there was more, pith and bone- talking about how a life is lived. The longer I read, the more I’ve come to a realization that breaks my heart. 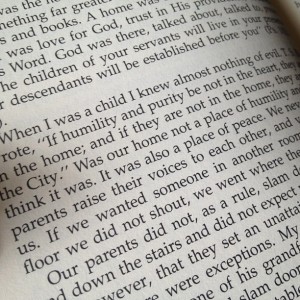 Reading her words help me understand the why. I doubt I could have heard this admonishment until now; had it come any earlier, I would have immaturely thrust it aside and placed blame on anyone else but my own self. But chastened by my recent experiences, I have ears to hear.

I’ve often heard myself described (at least in the younger years- I wonder to think what people would describe me as now, and yet- too afraid to know) as strong-willed. I’m starting to realize that strong willed is actually defined as someone who can’t control the will- rather, it controls her; to be in control of one’s will would mean (hopefully) anything but strong. A life of quiet certitude.

Lorelei takes ballet with a company now; and while the little ones are just learning the steps and positions, I often gaze into the larger studio, where the company dancers float en pointe to the music for the next performance. I am the little girl shuffling a bit behind the measure- I have so far till I float, but I am realizing with hope, now, that I can learn the discipline the mature dancer holds in her graceful hands. The endless practice. The endless mirroring of the movement of Christ, watching, just so, each time, improving, each time, bringing my will under His. He is the dance; I must learn it.

I’ve watched the girl-women dancers, on the edge of their adulthood, reaching over and over again, stretch-long. They tip from heel to toe and back down again, sometimes in such cadence that the music is accompanied by a steady swish, soft thud. A heart beat. Arterial song. I can hear it now. Spin from the center. Keep your eyes fixed. Lean back into the joy. Dance.